Download my latest CV by clicking here or keep reading for an online version. 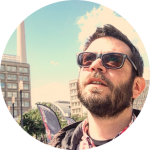 I work with game design prototyping and implementation on an unannounced project.

I work in the AI team, designing and scripting behaviors for enemies in an unannounced project.

Stockholm – 2019 – Present
I held the course Advanced Game Design for the Game Design class at Futuregames. In this course I focused on teaching systemic and emergent design with a mix of theory, practical knowledge and exercises in accordance with Futuregames teaching style.

I worked with concept, narrative development and screenplay writing on an unannounced project and on the Avatar game.

I worked part-time, as a summer job, with the developers of the app Just Football to improve the game mechanics of their product. The app is a location-based game aimed at kids from 10 to 16 years old and it requires players to play football in real life to unlock features and bonuses in the game. The developers felt the app didn’t have solid game mechanics so I worked in the weeks leading to the public launch of the app to a redesign and refocus all the features of the app. The app launched in the beginning of September 2017 and it reached the second most downloaded free app in the sport category of the App Store.

I am currently a student at Futuregames 2 years-long higher vocational school of Game Design. I worked as developer and designer for a number of projects, both in teams and solo, using both Unity and Unreal Engine 4. My main focus has been game design, scripting (C# on Unity and Blueprint on Unreal Engine 4), UX/UI and managing teams. During the course I worked on, among other projects, a 3D platform-adventure, a VR game and I also created a level using an existing commercial game (Skylar and Plux: Adventure on Clover Island). For a portfolio including student projects please visit http://cinquemani.it/games-portfolio/

Founder, game designer, graphic artist, additional programmer and producer at the independent game
company Bumblebee Studios. At Bumblebee I contributed – together with another person – to the creation of the original casual iOS and Android games Derat Inc. (2012), Heads Will Roll (2015) and Breaking Brix (2016), the medical app La Mia Voce (2013) and different versions of Buy and Sell, an advergame for the classified sites Tayara, Bomnegocio and Guateganga (2013).

As a User Acquisition Specialist I conceived, created and managed PPC and CPM campaigns promoting several games, DLCs, bundles and sales. I worked on a variety of different channels such as AdWords, Facebook, YouTube, AdRoll, Reddit, plus several game-related networks and custom-made display campaigns on many of the biggest sites in the game industry (PC Gamer, RockPaperShotgun, the Eurogamer network). I also planned and oversaw the creative part on some of these campaigns.

In this position I worked mostly on creating digital marketing strategies for a variety of clients, including some of the largest e-commerce actors in Sweden. My main area of interest was consulting on SEO, CRO, UX, content marketing and other inbound marketing techniques. In this position I was also responsible for the work of other digital specialists.

During my employment I maintained a constant growth of organic traffic to the sites I worked on, with averages up to +300% year over year.

Site manager for the websites pokerlistings.it and italiapoker.it. Duties included Search Engine Marketing, on- and off-site Search Engine Optimization and production of editorial content. My main target was to increase the leads and traffic for the website and develop partnerships with other websites. I was promoted Senior Site Manager in March 2010.

During my period at WGP the sites I worked on increased the number of conversions more than 200%, with a prolonged growth of relevant, high-quality traffic.

I managed the team that took care of the customer service and user generated content moderation operations. The team worked on the classified website Subito.it. My duties included measurement of efficiency and productivity of my team (ca.10 people).

I also worked as an external consultant for similar client websites in other markets (Blocket.se in Sweden, Compraventa.com in Spain, Custojusto.pt in Portugal) setting up customer service and moderation operations and testing.

Contributor and editor for a wide variety of paper magazines and websites, including the Official Xbox Magazine and the Italian version of Edge Magazine. My range of work included news, reviews, features and interviews, mainly about videogame and technology (more details upon request). Amongst other projects, I am one of the hosts of the oldest Italian videogaming podcast, Ringcast, and I founded and managed the videogaming blog Single Player Coop.